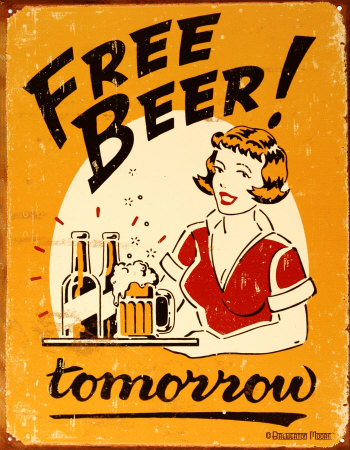 It could happen to YOU!

I am something of an enigma among the Aleheads. Unlike the rest of this motley crew, I am from outside the circle of college friends and acquaintances, and none of them truly “know” me in real life. Likewise, I don’t know them, at least yet, and despite having written posts here for a while now, I still haven’t even figured out where throughout the United States they are all scattered.

As such, it’s a little hard for me to know if I’m unique among our group in my drinking habits. In short: I go out pretty regularly on my own, on beer-centric expeditions, and I don’t know if this is an unusual thing or not. The reason is mostly that I simply don’t have many friends who share my passion for craft beer. And so I find myself heading places and going on beer trips on my own.

For anyone who does do this, however, allow me to share a sampling of the philosophy and lessons I’ve learned along the way concerning one-man beer expeditions. There are new friendships to be made and free beer to be had, if you simply follow these easy steps.

1. Approach all bar situations with an open mind

You never know quite where an afternoon or night will lead, and it’s best to approach them, I find, without a specific plan. I am a planner by nature, but in contrast to my instincts I have learned not to go to a brewery or a bar with a specific “hit list” of beers to try or places to visit in a neighborhood. One can never know exactly which rare beers might not be listed on the bar’s website or which opportunities might suddenly present themselves unexpectedly. Therefore, I show up at a new bar or brewery ready to try anything that strikes my fancy in the moment or is recommended to me by someone in the know. Speaking of…

If I’m someplace I’ve never been, I immediately try to find someone who is at least a semi-regular and learn everything I can from them. What kind of character does this bar or brewpub or brewery have in the community? What are the beers one shouldn’t leave without trying? What kind of one-offs does the brewery offer? Are any of those said one-offs still available in local package stores if they’re not at the brewery?

Listening to this advice can lead to experiences you would never have otherwise. Just talking to locals in towns outside my experience has led to the discovery of “secret breweries,” unexpected house brews, and destinations I never would have expected or discovered otherwise.

Naturally, in order to enforce rule #2, you’ve got to keep in mind rule #3…

Probably the most important rule to me. You’ll have to note that this does not include “Annoy the strangers next to you,” but by all means, engage the people around you in conversation. I am regularly amazed by how much I am able to learn from drinkers sitting on the barstool next to me. Statistically, when you’re at a nice beer bar or brewpub, there’s a good chance that the person next to you is somehow “in the know” or has useful connections. It’s the equivalent of “networking” in business, except it’s over glasses of craft beer, which makes it about 1000% better. That said, when you talk to people, make sure you…

Although many of the people you speak with will be very knowledgeable, an equal portion will know absolutely nothing about craft beer. I actually enjoy talking to these base newbies to the beer scene quite a bit, because they’re usually eager to learn. Often, you can identify these people by observing the way they are uneasy or confused while reading a beer list, unsure of what to order and staring at it like they’re trying to decipher the Rosetta Stone. Talking to this sort of beer drinker, ask obvious questions (What styles of beer do you already like?) and then take a shot in making recommendations that will lead the novice drinker to a more “legit” craft beer solution.

Example: Guinness fan? Point him toward some North Coast Old #38, or Avery’s Out of Bounds Stout, or Rogue’s Shakespeare Stout. Nine times out of ten, they will thank you for expanding their mind–trust me on this. Which leads me to my final point…

5. Don’t be afraid to accept a free beer from a stranger, now and then

I don’t make a lot of money as a newspaper cub reporter, okay?* At the same time, however, a lot of craft beer fans do seem to have a tendency to be well-off. These people, especially if you’ve just recommended a great craft beer to them that is rocking their world, have a tendency to say “Wow! Can I buy you a drink?” The proper response to this situation is “Hmm, I guess. I’ll have a ____,” where ____ is “moderately priced, decent craft beer from the list, but not something outrageous.”

The reasons for accepting are severalfold. First off, people who offer drinks like that don’t like to hear a “no.” Secondly, is beer education not a noble goal that deserves its occasional rewards? And third, IT’S BEER. Who are you to say no? ARE YOU TOO GOOD FOR BEER? I ASK YOU!

*This is to the extent that I simply don’t buy the more expensive bombers of beer when there are cheaper options within style. I’m sure that $15 Hoppin’ Frog bomber is probably good and all, but I can’t rationalize it when Avery is there for $6 or $7. Call it budget-conscious beer geeking.

It was this philosophy that several weeks ago led to me consuming the first Founders Kentucky Breakfast Stout that I had ever had. It was a weekend afternoon several weeks after the KBS release, long after any of it was supposed to be available, and I was hanging out in Chicago’s Revolution Brewing, makers of incredible IPAs that you seriously have to try sometime. 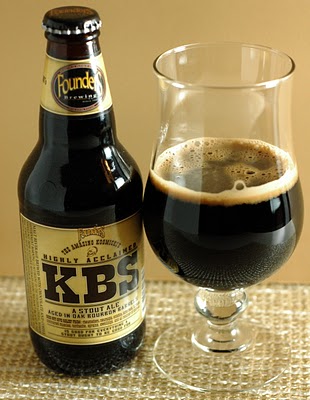 I had spent the last hour sampling taster-sized portions of the latest house brews, and was employing rule #3, talking to the middle-aged man on my right. He was a Puerto Rican man by the name of “Marcelino,” jovial and gregarious. Getting up for a moment, I informed Marcelino that I would be right back after a trip to the restroom.

Returning to my stool, I caught an unmistakable bottle off to my left out of the corner of my eye, sitting on one of the tables. A couple was seated there, with a stubby Founders bottle in front of them. It read, quite simply, “K…B…S…”

Approaching them immediately, I asked incredulously if they had gotten that bottle here at Revolution Brewing. “Yes we did,” the fellow told me. “The waitress told us when she gave it to us that there was only one more left after this one. It’s like $15 bucks though.”

Returning to the bar, I told the ever-friendly Marcelino of the rare beer that the nearby table was enjoying and how (relatively) expensive it was, and that there was supposedly one bottle remaining. Not to be outdone, the affable Puerto Rican insisted on buying a bottle that we would “split.” Attempting to offer him cash, he declined and insisted, asking the bartender “if they had some of that fancy Kentucky stout stuff.”

And thus, we ended up with the last bottle of KBS at Revolution Brewing, of which my benefactor Marcelino had no more than a taste before proclaiming it beyond his drinking abilities. I, unable to believe my own good fortune, sat there in Revolution Brewing on a weekend afternoon, drinking a beer I never thought I would get a chance to sample, all because I had taken the time to talk to the convivial man to my right. And let me tell you–the free beer is the beer that tastes the best and sweetest of all.

Don’t believe that one should annoy strangers? Let me know it. But know before you do that it will be difficult to convince me of the value of your position–unless, that is, you have some KBS to offer. In that case, I’m listening.