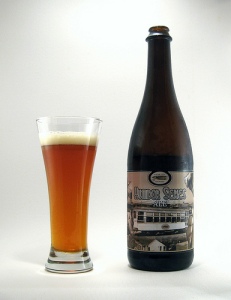 While I spent last weekend trying to come to terms with the unthinkably early passing of dear friend and beloved Alehead Sir Magnus Skullsplitter by attending his memorial services and “Scottish Wake” (think 4-hour Belhaven Wee Heavy chug-off culminating in a 2-hour oratory session by friends and family so poignant, it made Old Yeller look like Jackass 3) in NYC, the alewife and spawn were fulfilling prior familial obligations with the Sixpack clan in Tampa, FL. The Sunshine State is known for sandy beaches, college football, and electioneering, but world-class craft beers? Not so much. That is beginning to change with the rise of Cigar City Brewing. With Hunahpu’s Imperial Stout sitting #33 on BA’s prestigious “Top Beers on Planet Earth”, five selections in their trending “Top Buzz Beers” list, and the best blog moniker in the industry (Cigar City Brewing- The Trials and Tribulations of Opening (And Operating) a Brewery in Florida Or: How To Open (and run) a Craft Brewery in 7000 Easy Missteps……..) this Tampa ale factory is red-hot and hard to find outside of Florida. Luckily, the Alewife was able to sneak a couple of bottles past the TSA goons on her return flight, and I was the beneficiary of two Cigar City offerings. The first of those is the Humidor Series India Pale Ale. This beer is their flagship Jai Alai IPA barrel-aged in Spanish cedar (the same wood used to keep stogies at constant humidity) then bottle conditioned. Apparently cedar planks aint just for salmon grilling anymore.

APPEARANCE: Murky tan-orange. High turbidity with some chunky sediment towards the end of the bottle.

TASTE: This is an extremely well-balanced IPA, one that has no doubt benefited from the aging and conditioning process. The bitter piney resin and grapefruit are matched with a maple malty sweetness that gives the beer a smooth quality. Hop cones meet cedar cones to impressive effect; as the beer warms on my second pint hints of smoky wood, vanilla, and pepper emerge. The finish is bitter, tart, and very pleasant, with a breath of booze on the back end.

MOUTHFEEL: Creamy and smooth but full, perhaps a bit overly viscous for the style.

DRINKABILITY: While certainly not a session beer, this “Prestige” American IPA is surprisingly drinkable. I’d be interested to try the Jai Alai sans cedar, to see how much the wood aging contributes to the drinkability of this excellent beer.