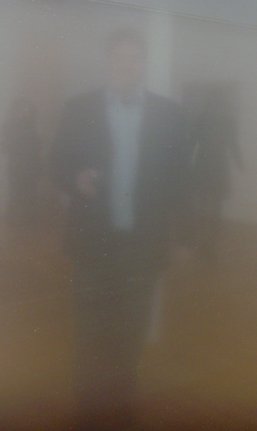 Of course it was his heart.

Of course it was. What else could it be?

Wifey and I were on vacation over the weekend. We got the news in an airport, making a connection back home. We read the e-mail together. We gasped together. And we went numb together. He had that effect on people.

He had been in a bar, of course. With friends, of course. Where else would he be on a Saturday night? He collapsed. They tried to revive him, but it all happened too fast. The kindest soul I’ve ever known, extinguished in an instant.

To be honest, I don’t remember how I first met him. He was a year older than me, so he was a brother and I was a pledge. There were a lot of new people to meet. A lot of names and a lot of faces, and at first, his didn’t necessarily stand out. He was like that. He wasn’t the loudest voice in the room. He wasn’t pompous or slickly charming. He was quiet, and sometimes shy, but he smiled and laughed so easily that it just disarmed you. I didn’t even realize we had become friends until, one day, we had. He wasn’t a part of my life, and then he was. Simple as that.

The first cliché: “He was the glue.” Except with him, it’s not a cliché. Not at all. He WAS the glue. He was the center of our orbits. He was our sun…that warm and shining light that we circled around. Want to know what everyone else is up to? Call him. Who’s getting married? Who’s having kids? Who moved? Who got a new job? He knew. He kept in touch with everyone. Who needed Facebook, or Skype, or G-Chat? We had him. He was our walking, talking Rolodex.

When we had gatherings, he planned them. Dinners together…he booked the restaurant and made the calls. Going out for a drink? He’d pick the best place. And he’d arrange for transportation. No need to worry…he would take care of it. He was the glue. He kept us together. When we spread to the four corners of the country after college…he kept us whole. That unbreakable bond we all formed and always talked about? To be honest…I think it was mostly him.

After that first year, I moved into a room across the hall from him. It was his Senior year. That’s when we became close. We lived on the third floor of our fraternity house…perhaps his favorite place in the entire world. He once spent an entire week without leaving that floor…despite the fact that there were no bathrooms or a kitchen there. I’m still not sure how he did it.

Our doors were always open and he would pop into mine every day. It was cleaner than his. His room was covered in about a foot of dirty laundry and assorted trash. He was never very clean or organized. So he would come into my tiny room, and plop down on the futon, and we’d hang out. We listened to music…Catherine Wheel, Our Lady Peace. We would drink cheap, poorly made cocktails (he enjoyed Gin and Fresca in an absurd lambic glass I had). We played video games…I’m fairly certain we logged about 1,000 hours of Tony Hawk between us. Mostly he would just sit and chat. He liked to be among friends. And we liked being with him.

OK…he wasn’t a saint. He drank too much. And he smoked too much. And he ate too much. And like I said, he was probably the messiest person I’ve ever known. He snored like a goddamn chainsaw. He would tell and retell the same story 50 times. But those were all just quirks…just part of the whole ridiculous, imperfectly perfect package. He wasn’t flawless…he was beautifully flawed. He was aware of all of those flaws and he would mock himself for them. He would point them out before anyone else could. But he would never point out yours. He would never tell you what was wrong with you. He only pointed out the good in others.

Like I said, he was the best of us.

He graduated and moved to New York. The city that dominated his New Jersey childhood and that he had always dreamed of living in. He was a lawyer. It’s a hard profession. In a hard town. And I think, in a lot of ways, it was a hard life. His first couple of apartments were very small. He worked long hours. He had every reason to cut off contact with his friends and lose himself in that world. But he didn’t. Of course he didn’t. He visited those of us still in college as often as he could. We knew he missed us, but we missed him more.

After I graduated, he visited me frequently in Boston. When I moved to DC, he just took the train the other way. He slept on every couch I’ve ever owned. In turn, I crashed in “almost” every apartment he ever lived in (with the exception of one tiny, terrible place that he lived in briefly and which, he claims, he didn’t allow anyone to see). There were friends in New York with bigger, nicer places. But for some reason, I always ended up at his. Probably because, at the end of the night, he was always there, and since I was in his city, I just followed him back. It was easier to just put my trust in him. He never let me down.

For a decade, I visited him in his city. Over the weekend, I was planning another trip to see him and other friends this Winter. I was going to call him on Sunday night, after I got home…but he was already gone.

The third cliché: “He showed up for everyone.” We talk a lot about “showing up”. About how important it is to “be there”. But we don’t always live by those words. Sometimes, life gets in the way, and we miss something. Maybe a birthday party. Or a holiday. Or a wedding. But he didn’t. He never missed any of them. Look at photos from any major event held by our merry little band over the years, and he’s there. Sometimes front and center. Sometimes in the background. But ALWAYS there.

How many weddings was he in? How many times was he the Best Man or a groomsman? I lost count. He was everyone’s best friend. Everyone’s confidante. I think we all “felt” like we were looking out for him, but it wasn’t until he left us that I realized it was the other way around. There he was…walking down the aisle with a bridesmaid. Smiling, as always. Beaming pride and happiness towards his friends. He never stole anyone’s thunder. He never made himself the center of attention. But he was still the center of everything.

He showed up. He always showed up. Only one thing could ever keep him away from his friends and that thing happened this weekend. He can’t show up anymore, but he’ll be with us. Always.

His passing changed the way I think about things. At first, it was the big things. It made me appreciate my family more. When Wifey and I returned from our trip with heavy hearts and watery eyes, our baby girl and our dogs never looked so good. I talked to my parents and thought about how wonderful their voices sounded. They knew him, of course. He spent many weekends at their house. They remember him fondly.

The little things have changed too. Things that seem ridiculous to think about…but the mind tends to wander in moments of stress. I think about the 2008 Superbowl, when Wifey and I went to Arizona to watch the Patriots finish off an undefeated season…only to have the Giants spoil things. I still think about the game from time to time. It was one of those sports moments where I thought the pain of the loss would never really fade. Except, today, there is no pain. Today, I’m happy the Patriots lost. I’m happy the Giants pulled off the upset. Because he was a Giants fan and it gave him joy. Who cares if my team lost? My friend got to watch his team win in the most thrilling way imaginable. He got that moment…and he deserved it. I saw him the following week when he, of course, showed up for Wifey’s 25th birthday party in Vegas. I bought him a glass of Scotch (part of a bet) and gave him the Superbowl gear I had prematurely bought in Phoenix (and clearly no longer wanted). He laughed, enjoyed his Scotch…and never mentioned the game. He didn’t gloat. He didn’t try to rub a raw nerve. He was happy his team won and that was that. No need to make me feel bad. That’s just how he was.

Then there are the things that eat me up inside. He named himself “Magnus Skullsplitter” on this site after a Scotch Ale he sampled at my parents’ house one weekend. In a recent post, he talked about finding a time for us to revisit that beer to see if it was any better or worse than he remembered. We won’t have that chance. We joked constantly about starting a bar when we were a little older and a little wealthier. That will never happen. We talked a few weeks ago about our upcoming annual Aleheads trip. We were trying to pick a date and location. He won’t be there. Our 10-year college reunion is this Summer. I know he couldn’t wait to attend. And now…

You can drive yourself crazy playing that game, but that’s part of life. It’ll take me…all of us, I imagine…some time to stop thinking those thoughts. We’ll think of the “what-ifs”…all the things he didn’t get a chance to do…all of the dreams that will remain incomplete. And the wounds will tear open anew every time. And it will seem like that pain will never fade.

But it will fade, of course. That’s part of life too. Some day, we’ll toast his memory and the pain won’t be as sharp or as fresh. Some day, we’ll be able to talk about him and joke, and laugh, and smile again. Some day, I’ll be able to look at pictures, and watch videos, and listen to his voice, and it will be OK. Not yet, but some day.

Of course it was his heart.

His was the biggest and best I’ve ever known. His heart was filled to the brim with love for everyone…and yet, he always found room for more. Maybe the physical bounds of that pumping muscle just couldn’t contain any more of that generous spirit. Maybe he loved us all so much that it simply burst.

All I truly know is that I miss him and I will always miss him. He was a part of my life, and for that I am eternally thankful. I just wish I had a chance to tell him that one last time…