In today’s craft beer landscape, it must be extremely difficult for a fledgling brewery to know the true value of what a famous name is really worth. There are simply so many new ale and lager factories out there, it is hard to say, how much do consumers really care about the history behind a brand name? And in the case of Chicago’s new version of Berghoff Brewery, is the “Berghoff” name a help or a hindrance?

There is a lot of history here. When the German Berghoff brewers arrived in the Chicagoland area, they began doing what Germans do best–making beer and schnitzel. The Berghoff Brewery opened in Fort Wayne, Indiana, in 1887. Berghoff beer was sold at the 1893 World’s Fair (where Pabst claims to have won its ribbon), and a restaurant named The Berghoff soon opened in Chicago in 1898, selling beer from the brewery. The restaurant still stands as a Chicago landmark today, but the brewery’s history is rather more complicated.

Suffice to say, it had its ups and downs. The brand was eventually sold, and it bounced around, fading in and out of existence. Berghoff beer was made for a while in Colorado, and eventually produced at Minhas Brewery in Monroe, WI. That was where I first encountered the Berghoff brand perhaps five years ago, a series of rather bland ales and lagers that never truly drew my interest. With the craft renaissance blooming in Chicago, there were plenty of breweries growing within city limits that I had my eye on.

Now, however, Berghoff is back, refocused with a snazzy new marketing campaign, new brewing location and new recipes. The beer is now being brewed at the Point Brewery in Stevens Point, but what really interested me was who the company sought out to help with their recipe formula–Chicago beer guru Randy Mosher.

I’ve spoken on Mosher before, but the guy is easily my favorite “serious beer writer,” defined by me as “someone who has written a book on beer.” He’s a Chicago institution, famous homebrewer, and well known as the recipe formulator for Chicago’s 5 Rabbit Cerveceria. He’s also the author of my favorite book on beer. In short, this is a name that Chicago beer geeks trust. Getting him to help on the brand’s relaunch was a coup. He was even involved in the historically inspired graphic design for the new Berghoff labels.

And so, when someone from Berghoff contacted Aleheads asking if we’d like to try some samples, I was happy to agree and offer my own assessment. What I found were a few middle-of-the-road brews, along with a couple excellent stand-outs. Here are all six, rated on our usual four-hop scale.

Solstice Wit: The brewery’s current seasonal is your typical Belgian wit, and claims to be made with “Calamansi juice,” whatever that might be. To me, the cloudy golden brew came across with strong aromas of clove, lemony wheat and a good shake of cracked black pepper. The citrus definitely comes out in the taste, reminding me of fresh orange juice, with more black pepper on the back end. Despite the juice comparison, it’s not all that sweet, and comes off as a much better version of a beer like Blue Moon. It would be great for weening someone off overly sweet Belgian wits. I give it 3 hops for a solid brew.

Reppin’ Red Ale: I have no idea what that name means (Reppin’?), but this was not the most inspired offering in the new lineup. It’s a very dark, brick red ale with clean, malt-centric aromas of caramel and bread crust and no particular hop presence. They mention rye in their marketing materials, but I didn’t detect the typical spicy flavor of rye in this beer, a surprisingly light-bodied red ale for being 6.2 percent ABV. It’s a light, caramel-centric red ale that would probably be ideal gateway beer for new craft converts, but not quite assertive enough for me. I give it 2.5 hops, as its main failings are just my own personal taste.

Sir Dunkle Crispy Dark Lager: As the name would suggest, a dark lager that pours a deep, dark red into chestnut brown. The aroma is very nutty and pleasant, reminding me of sweetened hazelnut coffee. Quite inviting. The taste is something like a molasses cookie, light of body again, making it a very easy-drinking dark beer in the mode of something like Negro Modelo. The flavor profile is pretty much perfectly layered, with a lingering toastiness that is rich but not overly sweet or cloying. I could drink a ton of this during the summer. I give it 3.5 hops. Damn good stuff.

Straight Up Hefeweizen: Well, that name would seem to pretty much state a claim for what this is, and it’s pretty much true. A very cloudy German wheat beer with a classic German hefe aroma that is low on the banana-type aroma and heavier on the clove, with crisp grain behind it, missing the slight funk and spiciness of the wit. A little watery on its body, with slightly sweet grainy flavor and herbal hops that almost reminded me of thyme. Again, not really any of that banana flavor showing up, which is something I like in American versions of this style but tend to notice less in imported German examples. This is quite comparable to one of those German hefes, which aren’t necessarily my favorite. It gets 2.5 hops from me. 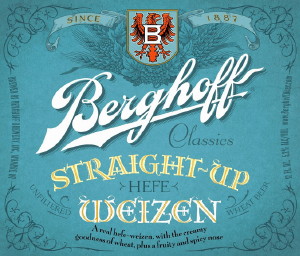 Dortwunder Lager: A classic Dortmunder (which is a malty blonde lager, if you don’t know) with an amusing name. Brilliantly clear, with a clean, distinctly continental aroma. Surprisingly hoppy on the nose, with very pleasant floral notes. Tastes like a dab of wildflower honey with very little bitterness, but still remains balanced. Refreshing, but not a pushover in the flavor department. The malt character mostly comes through as a very light sweetness that just rounds the edges out beautifully. This is seriously the kind of beer you could put side-by-side with any domestic lager in a blind taste test, and it would win every time. Excellent version of the style, 3.5 hops.

Germanic Pale Ale: The most unusual beer in the group, and the one I liked the least. It’s an ale with honey and molasses, presumably hopped like a pale ale with noble hops. Its aroma is a little sweet, slightly citrusy and smells rather like a solid American wheat, which I don’t imagine is what they were going for. It tastes on the dry side, with moderate bitterness and herbal hops. The flavor is most reminiscent of a German (not Czech) pils, if I’m going to compare it to something. If I was tasting it blind, I would guess that’s what it was. It’s a bit confused, so I’ll give it 2 hops.

There you have it. Overall, I’d say this is a pretty successful relaunch for a brand I previously didn’t have that much interest in. I could certainly see the dunkle and dortmunder becoming summer fridge mainstays if the six-packs are well-priced in their Chicago market. It will remain to be seen if Chicago’s current generation of beer geeks have any attachment left to the Berghoff name, but the brewery has done its part in providing a new lineup of beers that are true to its German heritage.