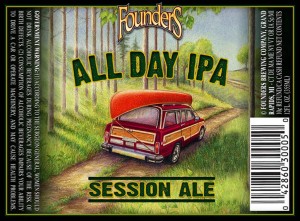 As Slouch noted a few weeks back, one of the critical issues facing Aleheads today is beer freshness. My local package/grocery stores have Founders Red’s Rye IPA from last May still sitting on shelves. Yesterday I saw a dusty six-pack of an apparently unloved domestic IPA dated March 2011.

Like Slouch, I’ve become obsessive about checking dates. I’ll skip over beers I know I love if the bottling date isn’t clearly marked because it’s become such a crapshoot. More importantly, I’ll intentionally buy a beer I’m not 100% sold on if I can guarantee that it’s fresh.

That’s how I ended up bringing home a sixer of Founders All Day IPA. I had sampled it on tap a few times and it wasn’t terribly memorable. It’s a session-strength, hop-forward brew that is an IPA in name only. My first thought was that it tasted like a watered-down Centennial IPA. Not the worst thing in the world, but it didn’t knock my socks off.

However, while perusing the Founders section of my grocery store, I noticed that every offering from the brewery dated from at least late 2012. It’s Mid-March now, so I’d really like my beers to have been bottled this year.*

*I know craft is still in its infancy in Alabama and there are plenty of new breweries that the local populace is still developing a taste for, but whether it’s under the aegis of the stores themselves or the distributors, SOMEBODY needs to be changing out stock! Beer is perishable. You don’t leave milk or strawberries moldering on shelves for years. Yes, beer has a longer shelf life than most produce…but it still HAS a shelf life! I’m not terribly concerned about a dusty Quad or Imperial Stout. But I’m not buying a year-old IPA. No one is. It will be there until someone in the store finally decides they want that shelf-space for something else.

Then I came across a sixer of the All Day IPA which I hadn’t seen in bottles in Alabama yet. It was packaged in late February so it was only a couple of weeks old. Perfect for a hoppy beer. I snagged it, brought it home, and ripped through the entire six-pack in two days. I thought it was great. A perfect beer for the increasingly warm Alabama weather. It was 72 degrees outside on Sunday and I sat in the backyard while the McHops girls played on the jungle gym and thoroughly enjoyed the All Day.

Perhaps my tastes are changing or, more likely, that I’m weakening in my old age, but I’ve discovered a soft-spot for hoppy, sessionable brews. I absolutely love Three Floyds hop-forward Pale Ale, the Zombie Dust. And I drank entirely too many Trailhead ISAs (India Session Ales) from Two Beers Brewing while in Portland last year. Whether you call it an over-powered Pale Ale like Three Floyds, an India Session Ale like Two Beers or an All Day IPA like Founders, they all have the same basic flavor profile: Lower ABV and lighter body than a standard IPA without sacrificing the hops.

My first impression with the All Day was that it didn’t leave that oily hop residue on your tongue that you generally get from your everyday American IPA. Most IPAs linger on your palate for awhile. That bitterness clings there and slowly builds up as you drink the beer.*

*Note: This is not a bad thing. This is a good thing.

With the All Day, you get plenty of grapefruit and pine in the nose and a quick hit of hop bitterness at the front of the sip, but by the finish it has entirely dissipated. Instead of that hoppiness building up over the course of the beer, you start with a clean slate with each sip. Hence the sessionable nature of the beer. It’s not an accumulative flavor so you quickly forget how many you’ve consumed and before you know it, your sixer is gone. And at 4.7%, that’s no big deal.

Admittedly, I still prefer the Centennial IPA more…and yes, I tend to gravitate towards bigger DIPAs for the most part. But I really dug the All Day and I’m quickly developing a taste for this style of beer. Bigger and hoppier than a Pale Ale, but easier-drinking and cleaner-finishing than an American IPA. It’s a hybrid brew that may just become the style of choice in the McHops Monastery during the hot, ‘Bama summer. I asked the other Aleheads their opinion on the All Day…here’s the conversation.*

*I edited out the parts where Kid Carboy talks openly about bestiality and where the Commander kept claiming that 9/11 was an inside job. They just didn’t seem relevant:

BARLEY:
What’s the consensus on the Founders All Day IPA? Didn’t like it when it first came out. Thought it tasted like watered-down Centennial. But I’m very much digging it this year. I can see myself drinking this every day now that it’s summer in Alabama.

HOPPA:
I wish they sold that in my neck of the woods.  I’ve been spoiled by IPAs from elsewhere as of late, most recently Surly Abrasive, so that when I have to select from more regional fare, I find myself a little underwhelmed.

KID:
All Day IPA is a weird case for me. I’ve thought of making a whole post out of this thought before, but I can’t bring myself to buy something like that if it’s being sold for the same price as the “regular” IPA. So in the case of Founders, if both All Day IPA and Centennial are $9.99 at the local store, it’s going to be hard for me to feel like I’m getting “value” if I’m getting All Day IPA, even though it’s supposed to be their session beer. I’m just asking for like $1 difference. That’s all I need.

DOC:
Just got my first 6 pack of All Day last weekend, never saw it out here last year. I’m underwhelmed. Yes, I could see myself drinking 10 of these while winning father of the year awards in the backyard this Sunmer, but as a standalone beer on a snowy March night in Boston it just didn’t work. Cognitive dissonance at its finest. Phenomenal nose, citrusy and abundant, yet lacking in taste to back that up.

I’ll back Kid 100% on this. Mark it at $7.99, even throw it in cans, and delay the release until Boston Spring, which lasts from Memorial Day to Flag Day.

SLOUCH:
Just tried it for the first time. It is very drinkable and a nice grassy aroma, but at 11 bucks a sixer here, I will pass. I’d love to try it on cask, though.

COMMANDER:
I’ve had it a number of times.  My overall impression is: first, it taste like a face full of grapefruit; second, I’d be very proud of it if I made it in my kitchen; third, there are way too many better beers at that price point for me to buy it more than very occasionally.

BARLEY:
That’s certainly true, but there’s definitely a lack of easy-drinking, hop-forward beers out there for summer sessions. Granted, they’re ALL session beers, but with my drinking habits, I’m partial to hoppy beers that can be consumed by the dozen.

DOC:
I’ll give you one nod on this one Barley.  I had to do some interior painting yesterday and most certainly enjoyed the remaining 4 All Day’s that were wasting away in my fridge.  The situation was perfect and I could do far worse for a sessionable working beer.  That is all.

COPPERPOT:
It’s clear that they were going for something with a lighter mouthfeel and alcohol content, but with a face full of hops. They’re a brilliant brewery, so they were successful. I applaud them, and frankly I can’t think of many lighter offerings that are THAT hop-forward. Sure, I may not buy it much, because I prefer to taste bigger, more complex beers. But I’m not going to fault them for producing it.
After all, what I wouldn’t give to have 4 of those All Days in my golf cart on a hot summer’s day, instead of paying the cart girl $5 per Bud Light.

BARLEY:
Yeah, that was more my point. I think they executed exactly what they were going for and I can see myself buying it sporadically as the weather gets warmer. Agreed that it’s not a world-beater, but sometimes I feel like mulling over an Imperial Stout and sometimes I’m just goddamn thirsty.

SLOUCH:
I’d like it noted that this perfect lawnmower beer smells just like fresh cut grass. There’s just one problem. Why are we having this discussion in March? It will be off shelves or stale by the time it is warm enough to be of ideal value for most of the country. I can see why brewers release pumpkin beers in the summer to be first to the shelves in a competitive field, but this beer should be a June release. Double Trouble should be out now.

So there you have it Alehead Nation. The consensus is that, yes, the All Day is a solid, drinkable brew. The other Aleheads enjoy it and agree that there’s nothing better than a sessionable, hop-forward beer when the weather starts heating up. However, most of the Aleheads would like it if Founders priced the lower-ABV All Day a dollar or two cheaper than their other offerings so it feels like a better value. There’s also some concern about releasing it when it’s still technically Winter instead of waiting until May to take advantage of the desire for lighter beers when the sun starts baking.

What’s your take on the All Day? Or session-strength IPAs in general?