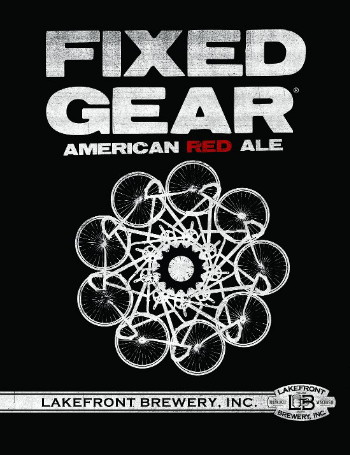 I really like Milwaukee’s Lakefront Brewery, for whatever reason. I don’t think anyone out there is going to argue they’re the most “interesting” brewery in the world, and they don’t make barrel-aged crazy special releases, but damnit, they make some tasty brews. Their Bridge Burner is a great American strong ale that any Arrogant Bastard fan would love. Their River West Stein Beer is one of the best American examples of a Vienna lager out there. And my mother loves their American wheat ale, Wheat Monkey. Add this all in to the fact that they have one of the very best brewery tours in the business anywhere. Why? They give you beer before, during (several times) and afterwards. Reason enough?

No, Lakefront doesn’t really have any one beer that sets the world on fire. They make their mark in being just generally solid across the board, with a gregarious brewery staff, fun tour and good ethos to their business. They’ve also figured out a very tasty American red ale called Fixed Gear which now seems to be available year-round in six-packs. Tasting note follows.

APPEARANCE: Bright red and beautiful in the glass with a finger of foam. Picturesque.

TASTE: A pretty solid level of background bitterness dukes it out with a strong charge of caramel malt, which is balanced by hops that come through with a classically American blend of pine and citrus.

DRINKABILITY: Very flavorful but still quite quaffable. The fact that the two main flavors are in balance with each other maximizes the drinkability of this beer, making it seem to weigh somewhat less than it’s alcohol total.

OVERALL: 3.5 hops. There’s very little that this beer could do to be any better than it is. American red ales are perhaps the ideologically perfect expression of American craft brewing (or imperial red ales), as they combine large amounts of all sorts of typically American flavors. This one is a balanced and delicious take on the style, almost an archetype really. I can’t think of better praise than to say that this is the sort of beer I can’t imagine turning down in any season. This style deserves a place in the fridge year-round. Hipster-inspired label be damned.