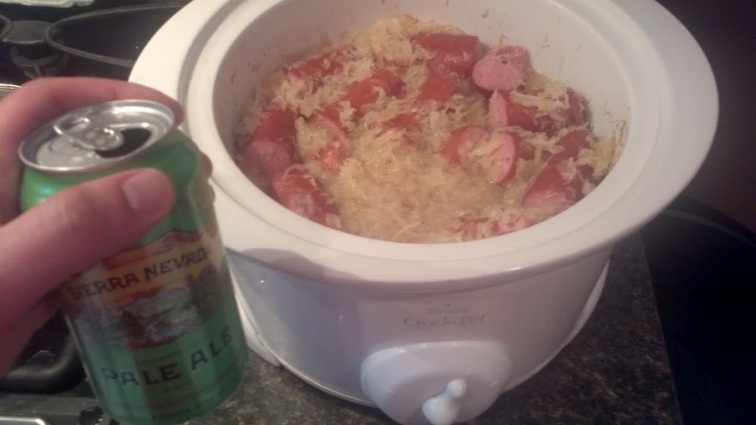 I find cooking with beer to be one of the most morally vexing issues of our time. Sure, food is good; some may argue a necessity. Food that tastes good is better still… and adding beer makes everything better. Right?

And yet, I was raised to never waste beer- and I’m talking cheap swill of the sort you wouldn’t order for your worst enemy. Beers like Genny Cream and Milwaukee’s Best. During my formative years beer was regarded as a sacred beverage, and you always had to finish your beer. God forbid if you accidentally spilled a beer, you were duty-bound to drink an equal volume of the same in tribute. All-in-all, I think this outlook is good and worthwhile- we live in a wasteful society, and I despise the notion of drainpours… those beers brewed in such a way that they are rated to be not worthy of your consumption. Get over yourself, people. It’s just beer.

That’s why it’s so hard for me to dump a perfectly good beer into food I’m preparing. I like to cook- nothing fancy mind you. I like to grill meat. I like to cook breakfast. By far the favorite culinary weapon in my admittedly limited arsenal is the crockpot. It’s hard to mess things up; most recipes throw out suggested figures like “cook on low 4-6 hours” (I appreciate a large margin for error when cooking). You can throw a bunch of ingredients in the slowcooker before you leave for the day and come back to a home wafting delicious aromas, with no danger of burning your domicile to the ground. The meal can be kept fresh and hot for the whole family, despite staggered schedules and varying supper times.

That’s why I was excited to stumble across a crockpot recipe that is cheap, easy, hearty, and greatly improved by beer. Does my shriveled Alehead heart feel a pang when I added the fermented ingredient? Sure, a little, but it grows three sizes when I sample the final product.

6-pack of lightly-colored, hop-forward, economically-priced ale (Any Pale Ale or IPA  worthy of your fridge will do)

Put all the meat, sauerkraut, and mustard in the crockpot. Open and dump one of the beers into the crockpot. Turn to low, and cook for roughly 5 hours. Drink 1 beer every hour, as needed.

A hearty, hoppy Bavarian concoction that works for family dinners, pot-luck parties, or tail-gate get-togethers. A plus- the leftovers kick ass.

With the last couple leftover servings, chop up the meat and fry it with the remaining kraut in a pan with a little butter or bacon grease until brown. It looks like this:

So is this worthy of an Aleheads post? Not really, but I’m suffering from writers block and we haven’t put up any new content in about a week, and Brother Barley is sending the whole crew email composed solely of text-based emoticons with judgmental expressions.

So, I pose to you, Alehead Nation: do you like to cook with beer? What’s your favorite recipe? Easy, cheap, and meat-based preferred.

12 thoughts on “COOKING WITH BEER”