No, really. Ask any of the aleheads who know me well, and they’ll tell you.

“Copperpot? He’s a good guy. Reliable. Fun. But yeah, he’s usually about two steps behind in the conversation.”

That’s just how I roll.

Like with this whole craft beer thing. I’m much closer to the “new convert” end of the spectrum than I am to the “seasoned veteran” end. And although I know much more about beer than most of my family and friends, among the Aleheads I’m still at the back of the pack in terms of my expertise on the topic. But as I said, it suits me.  I can’t quite keep up in a conversation about Belgian IPAs between Doc, Barley, and Slouch, but I’m ok with that. I’m learning, I’m having a great time, and I realize that it’s a process.

I also know that I’m not the only one. As we know, craft beer is exploding onto the scene and acquiring bandwagon fans faster than the Oklahoma City Thunder. So there are tons of folks out there who are just sampling their first Lagunitas IPA, or tasting their first beer that’s been aged in oak barrels.

And they want to know more.

Given that I still have considerable gaps in my craft beer knowledge, I figure I should at least use my naiveté to the benefit of others.

So here’s my question for the more knowledgeable Aleheads: “I have a bunch of porters in my fridge left over from the winter. Do I need to drink them now, or will they keep well?”

Brother Barley: “Generally, no. Porters tend to have lower ABVs and do NOT age well. As a rule, most beers should be consumed within 6 months of purchase and preferably much quicker (within 1 to 2 months). The only 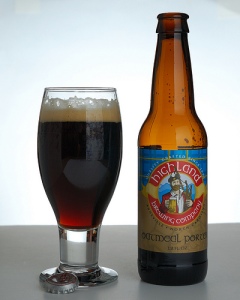 styles that really age well are barleywines, old ales, quads, and some imperial stouts. If the beer is less than 8% ABV, it’s not really worth it. And if it has a big hop character, it’s definitely not worth it since hop oils break down over time and lose their aroma and freshness. Cellaring has become a big deal in the industry, but it needs to be understood that beer is a perishable product and the VAST majority of beers and beer styles are meant to be consumed immediately.”

Doctor Ripped Van Drinkale: “In my experience, the best beers to age are anything that’s bottle conditioned (As long as it’s a stable environment) and anything over 8%, regardless of style.  This absolutely includes Imperial IPA’s, especially those that are barrel-aged to begin with, since the hop profiles change so much and some of the astringency melds into a smoother flavor.  Just think of Sierra’s Bigfoot or Celebration, even though neither is an Imperial IPA.  Huge, huge, hop profiles when they’re fresh.  After a year or two in the bottle they mellow out a bit and some of that crazy hop bitterness dies off and allows the malty goodness to shine through.  Yes, some of the freshness is gone, but I only want those grassy flavors in my single IPA’s anyway.  To each his on though.  I’ve had Imperial Stouts turn to soy sauce and Barleywines turn into something resembling Boon’s farm.  I’ve also forgotten about a 4pk of Allagash Dubbel for over a year and it turned out to be amazing.  There is no hard fast rule to live by so just keep trying until you hit on something that works.”

There you have it, fair readers. Looks like I’ve got some porters to drink! Feel free to ask more questions in the comments section, and I’ll use them in a future edition of Copperpot’s Confusions.