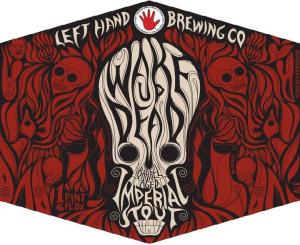 Ultimately, what’s in your bottle of beer should take precedence over everything else. All that should matter is the taste and quality of the beverage…the label, packaging and iconography are all just superficial fluff. But humans are nothing if not superficial. We judge books by their covers all the time. We judge others by how they dress, how they wear their hair and how stupid their goddamn stupid faces are. And, like it or not, we often judge a beer by its bottle.

Like all Aleheads, I’ve been sucked in by a pretty label. Some breweries simply do a better job of making their beers presentable on the shelf. That doesn’t make their products any better, but I do respect craft breweries that put at least a modicum of effort into dressing up their wares. Clearly most of a brewery’s focus should be on producing the best beer possible, but there’s no harm in trying catch the eye of a potential customer by differentiating your product with a well-designed label.

In that vein, I decided to put together a list of my Top 20 favorite breweries in terms of label design, graphics, and iconography. Keep in mind, these are certainly NOT my favorite breweries as far as actual beer goes. Many of them ARE excellent ale factories, but all I really care about for my purposes is how attractive their bottles are. When it comes to this post, it’s what’s on the OUTSIDE that counts! I’ve broken my Top 20 list down into four categories: Classic, Works of Art, Off-the-Wall, and the Best of the Best. Enjoy!

20. Redhook: During a recent Podcast, Slouch and I talked for a bit about Redhook. The formerly decent brewery went the Goose Island route a number of years ago and sold a chunk of their company to Anheuser-Busch. Since then, their products have simply gotten worse and worse. With craft beer booming seemingly everywhere recently, Redhook’s sales have actually dropped. So they did what any company run by Anheuser-Busch would do, they put all of their effort into changing their packaging rather than their shitty, shitty beer. While I would never consciously buy a Redhook beer, I must admit that both their old bottles (on the left) and new bottles (on the right) are quite eye-catching. Distinctive, clean lines and colors and simple but bold fonts. What’s inside the bottle may still suck, but they definitely nailed the new packaging.

19. Anchor: The grandaddy of the craft beer movement, Anchor hasn’t changed a damn thing for decades and that’s just fine with me. Their short, slope-shouldered bottles are inimitable and the simple, oval labels can be spotted from a mile away. Sure, they seem to use a different font for their company name on every bottle which is a little odd…and their graphics are a little drab. But any brewery that makes a Small Beer and actually puts a smaller label on it is OK by me. 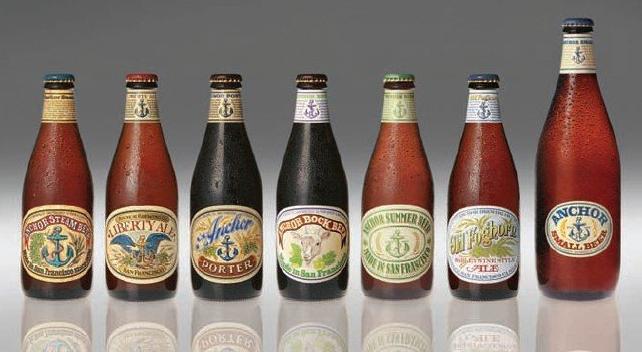 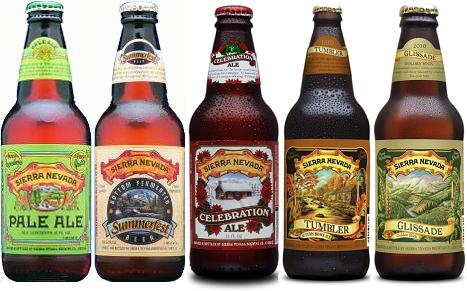 17. AleSmith: I’ll admit the YuleSmith bottles are fugly (and why is there a summer beer with the word “Yule” in it AleSmith? I love the beer, but the name is just ludicrous…), but everything else from AleSmith is clean, simple and classic. Their IPA, Anvil, and X bombers are incredibly distinct with giant, bold white block letters. AleSmith also eschews labels for etched in graphics (like Stone Brewing) so there’s no paper or stickers. The labels might strike you as a little stark and spartan, but there’s no mistaking an AleSmith bottle. Also, their beer is delicious. 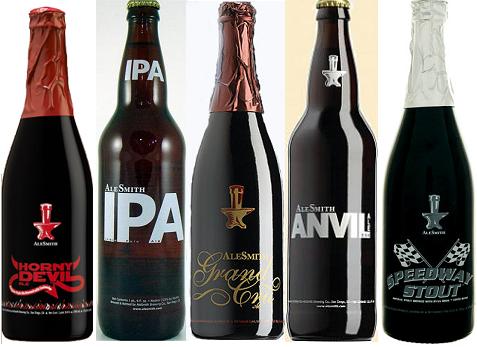 16. The Bruery: The Bruery might have the “classiest” bottles in the beer world. Large-format 750s with elegant labels make Patrick Rue’s beers look like pricey bottles of port or madeira. Each beer features a different “crest” with a variety of geometric, colored patterns and a myriad of fonts (except for the standard swirling script of the company’s logo). I readily admit that I purchased my first few Bruery offerings simply because of the striking bottles. Fortunately, the quality of the beer inside the bottle has always matched the beauty on the outside. 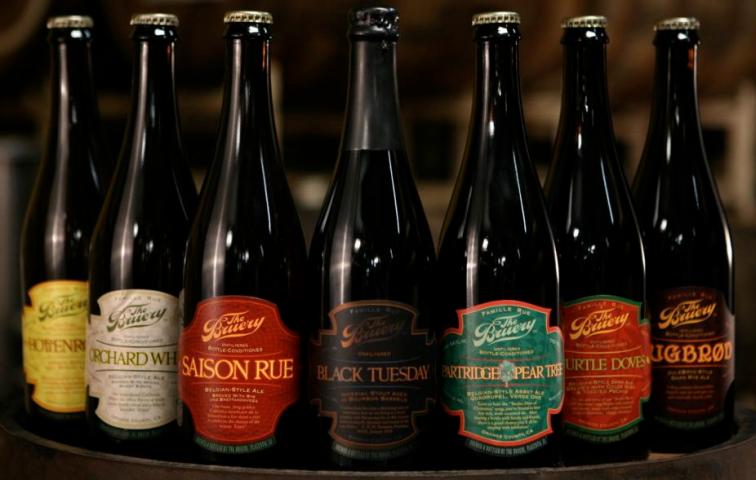 15. Unibroue: I’ve bashed this Canuck brewery on these pages before, but there’s no denying the breathtaking beauty of their label art. Just take a peek at the Maudite which seems to show some Canadian canoe-version of Wagner’s Flying Dutchman. Or the evil-looking Pegasus hovering above the steeples on the front of a Trois Pistoles bottle. Perhaps a touch over-dramatic for a bottle of beer, but they’re gorgeous nonetheless. 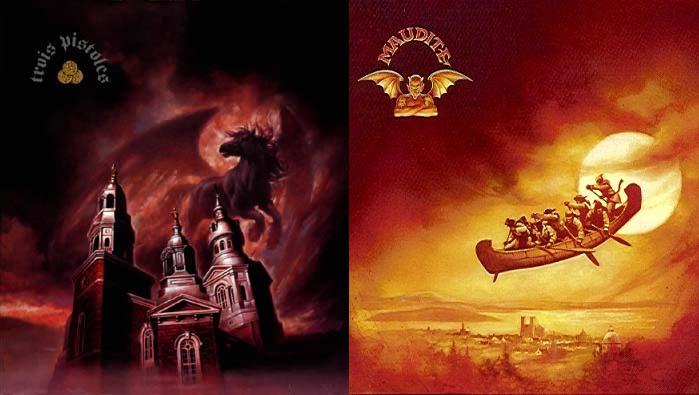 14. New Belgium: New Belgium actually has a few different approaches to labeling. Their Explorer series goes for simple, basic iconography while their Lips of Faith series has funkier, abstract labels. But they’re probably best known for their Follies and Seasonal brews like the Fat Tire, 1554, and Mighty Arrow. Those beers have lovely, peaceful paintings as their labels which draw the eye and tell a story. The Mighty Arrow is probably my favorite as it’s a tribute to the owner’s dog. I’m a sucker for beloved pets.

13. Jolly Pumpkin: Jolly Pumpkin has something of an eerie, piratey, Caribbeany theme going on with their beers and I personally think it works very well. Their labels all feature stylized, watercolor images of nautical imagery. Particularly striking are the Madrugada Obscura, Calabaza Blanca, and Luciérnaga, but all of Jolly Pumpkin’s labels are tiny works of art unto themselves.

12. Lost Abbey: Lost Abbey has some of the most beautiful and consistent packaging in the craft beer world. Their large format bottles all use a cage and cork instead of a cap and they all have the same pointed arch label with a Celtic cross on top, a distinctly colored border, and a lovely inset graphic. My favorite is the Angel’s Share which shows a tiny fairy escaping from an oak barrel (the “angel’s share” is the booze that evaporates out of a barrel when spirits are being aged). 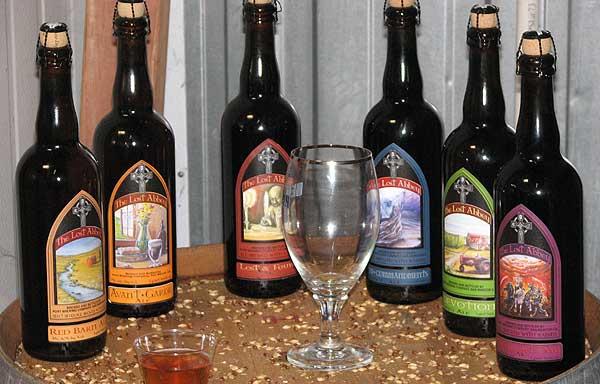 11. Founders: Founders labels are all unique. In fact, you’d be hard-pressed to tell that all of their offerings come from the same brewery. But what they lack in consistency, they make up for in dramatic artwork. Their Double Trouble is probably their best which shows one of those classic illusions that allows the viewer to see a face either rightside-up or upside-down. The Red’s Rye features a sketch of a local homeless man done by a Michigan artist and the Dirty Bastard has an eerie drawing of one of the meanest looking Scotsmen you’ll ever see. As for the ridiculously tasty KBS, its label makes it look like an old-timey medicine bottle which is just awesome. 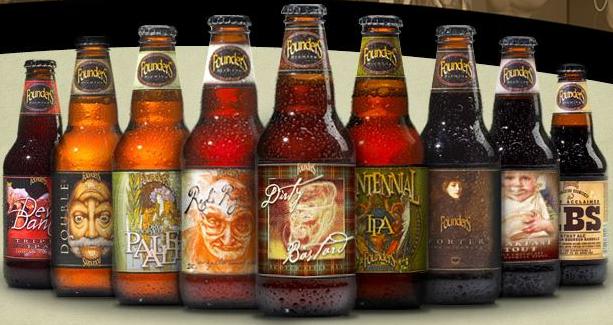 10. Pretty Things: Sort of the De Dolle of America, Pretty Things specializes in strange, stylized, cartoonish imagery with bright, bold colors and hauntingly surreal graphics. The Jack D’Or is probably their best, but the flute-playing cherry on a bottle of Confounded Mr. Sisyphus is equally mesmerizing. 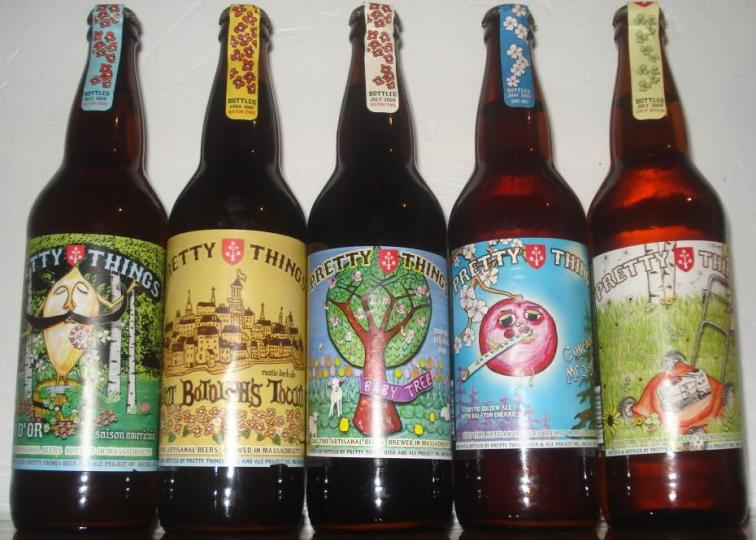 9. Boulder: Boulder used to have some fairly dull iconography and a few of their beers (like the Buffalo Gold) have had the same drab images for years. But recently, Boulder has taken a bold approach to their newer beers with funky fonts, explosive colors, and cool, trippy labels. Check out the Hazed & Infused, Flashback, and Obovoid for examples of this very striking new design approach.

8. Terrapin: Terrapin’s small-format bottles usually have beautifully-rendered cartoons featuring the Terrapin turtle in various scenes. The Wake ‘n’ Bake is my favorite with a clearly stoned turtle baking some fresh cookies and drinking coffee with a hazy sun in the background. I’m also partial to the souped-up roadster featured on the Big Hoppy Monster label and the super-hero turtle on the Gamma Ray. But where Terrapin really has fun with their graphics is on their Side Project beers like the Hopzilla and Cap’n Krunkles which feature some pretty ridiculous cartoons.

7. Three Floyds: Three Floyds has some of the best labels in the business though they clearly don’t care if their offerings look anything alike. The Moloko Milk Stout features beautiful, 60s-era iconography while the Dark Lord has one of the most dramatic images ever put on a bottle. Perhaps their strangest is the Apocalypse Cow which features a disconcertingly large, angry, cyclops cow on the label. Why? Because it’s cool…that’s why.

6. Flying Dog: Though the name of their best-selling beer (Raging Bitch) is causing a stir in buttoned-up Michigan, it’s Flying Dog’s label art that should really be making people talk. Designed by gonzo artist Ralph Steadman, Flying Dog’s frantic, movement-filled graphics and fonts are as unique as any in the beer world. Take a peek at the Gonzo Imperial Porter label…it’s the stuff of acid-induced nightmares. 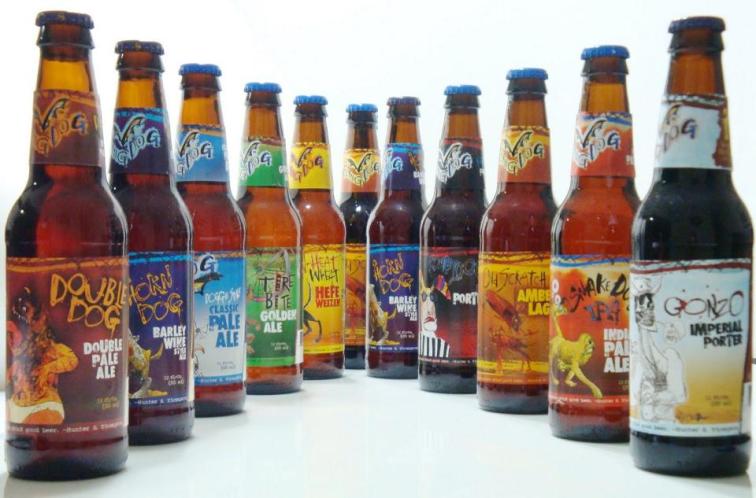 BEST OF THE BEST

5. Southern Tier: My top five breweries in terms of label art marry graphics, consistency, font choices and color schemes effortlessly. One of the keys for me is recognizing that a beer comes from a certain brewery even if I haven’t seen that particular bottle before. Take Southern Tier. All of their beers have a consistent look and font choice. Their small-format bottles all look the same but maintain clear individual characteristics and their large-format bottles use simple, but sharp graphics with the trademark Southern Tier logo band either running horizontally or vertically across the label. They don’t do anything crazy or overly bold, but it just works.

4. Great Divide: Speaking of consistency, Great Divide may be the best in the business when it comes to clearly differentiating their brand. Great Divide uses large, all-caps, block letters on every beer (except the Hibernation for some reason) with minimal silhouettes for graphics. The name of the beer is the star of the show on the labels and you can spot a Great Divide beer from across the package store. I suspect Great Divide has sold more beer because of great label design than any other craft brewer there is. 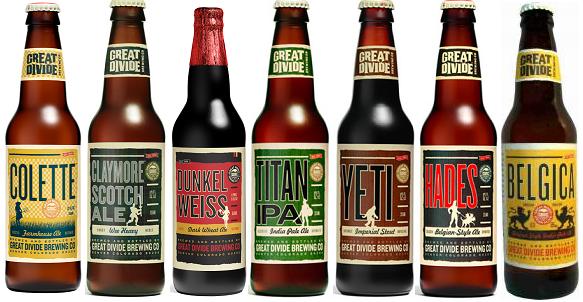 3. Midnight Sun: The Panty Peeler is their most notable label, but I absolutely love ALL of Midnight Sun’s stylized, trippy cartoons and crazy-bold font choices and colors. Their beers are so distinct and their labels are so fun that you almost HAVE to buy their beers when you walk by them. Also, the Mayhem and Monk’s Mistress use buxom cartoon women as clouds…so they have that going for them. Which is nice. 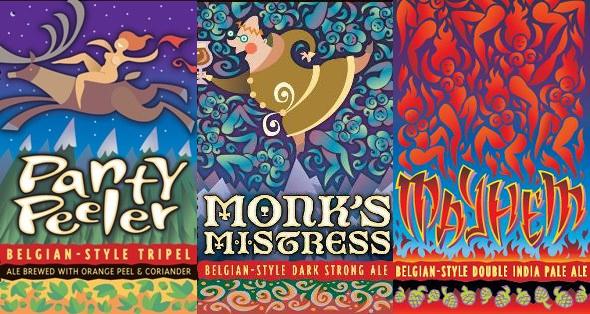 2. Odell’s: I’m partial to old-timey, Victorian-era labels and Odell’s does it better than anyone. They look like dusty beer bottles you might find in your great-grandfather’s attic or like a brew that some dude in a bowler hat with a huge moustache might be drinking on top of a giant-wheeled bicycle. They’re the beers Mr. Burns would drink and the ones that would have been featured in the Smashing Pumpkins’ Tonight Tonight video if Billy Corgan drank anything but wine coolers. Whoever does Odell’s label design, kudos to you sir or madam. 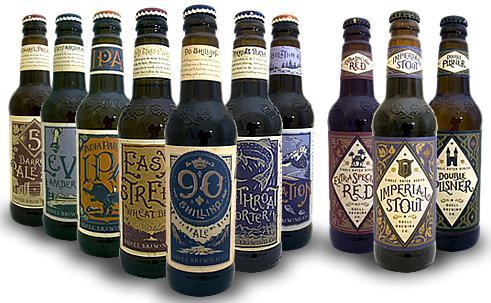 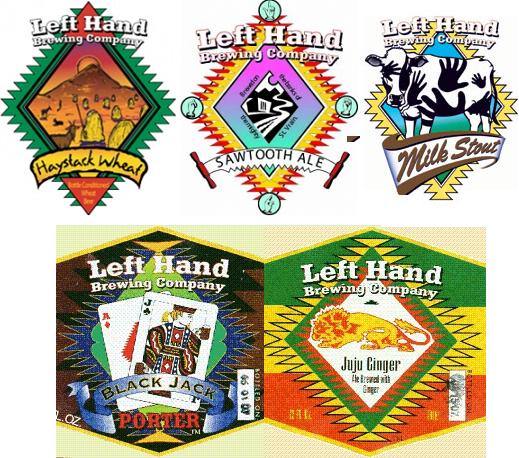 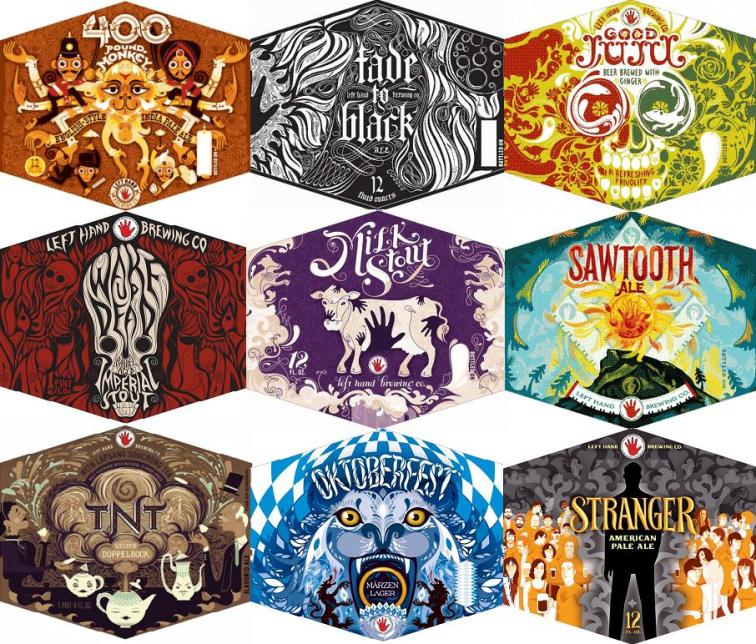 Simply awesome. Well done, Left Hand. The Wake Up Dead alone would make you #1 in my book, but add that to the Oktoberfest and Stranger and there’s no contest.

In the near future, we’ll look at some of the worst breweries in terms of packaging. I don’t want to give anything away other than to say, “Weyerbacher…you’re on notice.”