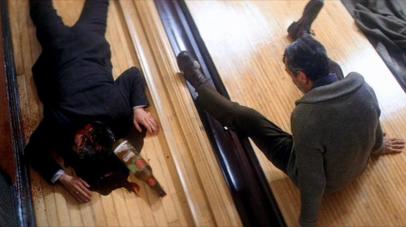 Like most Americans, I consider myself an indisputable product of these here United States. But when asked about my heritage, I start spouting out fractions like a 3rd grade mathlete. “Well, I’m 1/8th this and 1/4th that, and 1/16th blah blah blah.” My grandfather was Irish, so I tell people that I’m a quarter Irish. This is despite the fact that I’ve only been to Ireland once (Doc and I took a trip there while in college for the sole purpose of swimming in a vat of Guinness…didn’t pan out). I have no real connection to Ireland. I don’t know much about the culture. The only Gaelic words I know are sláinte and shillelagh (the latter only because the Celtics’ leprechaun mascot carries one at all times to beat Lakers fans with). I am, in fact, not even remotely Irish. Yet because I had relatives from the Emerald Isle, I beam proudly on St. Patrick’s Day and drink dry Irish stout with reckless abandon (to be fair, I would do that even if I was Italian).

I think it’s just standard operating procedure in America. We’re a young country…and most of us have at least some relatively recent immigrant stock. Almost all of my great-grandparents were born elsewhere which means that the quirky mix of genes that somehow led to the creation of Brother Barley has been in the US for not much more than a century. So when people ask about my heritage, I’ll fire off a list of countries that don’t actually mean anything to me. There’s just something about saying “My family’s background? Oh, we’re American” that sounds a little jingoistic and condescending. We’re a nation of immigrants…and for whatever reason, we hold onto those homelands…even if we’ve never set foot in them.

For me, one of those homelands is Finland. My maternal grandmother came from Finnish stock (though she herself was born and raised in New England). I’ve never been to Finland. I know practically nothing about the country other than that it’s always ranked highly in quality of life surveys and that the inventor of Linux is from there. My only real knowledge of Finnish cuisine was eating delicious, sweet nisu bread at my grandmother’s breakfast table when I was young.

The Finns, like every other culture on Earth, have developed some proprietary alcoholic beverages of their own. Most are fairly rare in the US. Sima, a type of mead, is made with lemons, raisins, and plenty of honey. Kilju, a controversial spirit, is essentially just unflavored, fermented sugar water. But perhaps the most well-known Finnish beverage is the traditional, juniper-flavored beer called sahti.

There is no standard way of producing sahti. The grains used in the production of the beer can include malted and unmalted barley, rye, wheat, oats…or sometimes just entire loaves of baked bread. Instead of hops, sahti is flavored with juniper berries and the mash is filtered through a sieve made of juniper twigs into the mash tun (called a kuurna in Finland).

Sahti, like many regional beers, is relatively unknown outside of its home country. But as craft brewers have started to scour the world for innovative, unusual ways to brew, sahti has come to the attention of some of the leading lights of the US beer world. Dogfish Head was probably the first to commercially brew a sahti, though their version, “Sah’tea”, combined traditional Finnish ingredients with decidedly non-traditional chai tea spices. Why? Because Sam Calagione is a nutbag. Is it at least any good? No. No it isn’t.

Up until recently, Dogfish Head’s Sah’tea was my only pseudo-experience with the traditional beer of a quarter of my ancestors. A quick search on BeerAdvocate reveals that this isn’t too surprising. Right now, there appear to only be two commercially available sahtis in the US other than Dogfish Head’s abomination. One is made by Goose Island (which I have not sampled). The other, part of New Belgium’s Lips of Faith series, I tucked into over the weekend…

TASTE: The malt bill has a rye-bread spiciness which is complemented nicely by citrus fruit notes and a clean, grassy finish. It has a dry, white wine complexity that refreshed our crew very nicely on a freakishly warm, 75-degree day in mid-February.

MOUTHFEEL: Lively and sparkly on the tongue with a dry, clean finish. A touch lighter than medium-bodied.

DRINKABILITY: We all found the beer to be eminently drinkable. Refreshing and clean, with just enough unique flavor to remind you that you were drinking a fairly unusual style. It’s not a world-beater by any means and I’m not sure it would truly sell you on sahti as a commercially viable style. But we enjoyed the bomber and I will probably seek out other sahti offerings if and when they become available. I’m sure my ancestors would be proud.