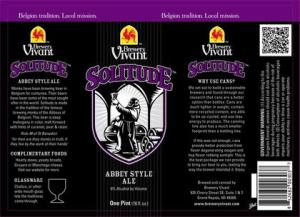 Nice piece of news a few weeks back out of Grand Rapids, MI (home to the Aleheads’ perennial “Best Brewery in the World” contender, the Founders Brewing Company). It appears that a new ale factory, Brewery Vivant, will be selling their Belgian-style brews in 16-ounce “tall boy” cans.

Canned craft beers are hardly novel these days. Since Oskar Blues began the craft can revolution in 2002 with the release of their Dale’s Pale Ale, many forward-thinking breweries have jumped on board the aluminum bandwagon. You’ve probably read our discussions of canned beer in the past, so we won’t go into detail about the advantages those little metal cylinders afford (no light spoilage issues, easier to stack and ship, less breakage, cheaper to produce and recycle, etc.). Suffice it to say, when an idea makes this much sense, it’s only a matter of time before it goes from being a novelty to being the industry standard.

But, for whatever reason, Brewery Vivant seems to be the first ale factory canning BELGIAN-style beers. I think this is a great step forward. Even New Belgium, a brewery famous for their Flemish-inspired creations, only cans their flagship Fat Tire, Ranger IPA, and Sunshine Wheat Beer. They haven’t encircled their Belgo-style beers in metal just yet (though I assume that will change eventually).

Let me quickly point out that none of the Aleheads have sampled Brewery Vivant’s beers at this date. I love their sustainable focus and their iconography and design appear to be top-notch. But if ecologically-sound philosophies and pretty pictures guaranteed success, hippies would rule the world.*

*Note: They do not…though they do make good ice cream.

Nevertheless, I am very excited for this latest news in the world of canned craft beers. I’ve been surprised that Belgian brews had not made their way to the canning line as of yet. I didn’t know if I missed the memo and that perhaps traditionally bottle-conditioned Belgian beers didn’t do well in cans. Or maybe brewers just decided that a dusty ol’, corked glass bottle was just the best-looking vessel for a Flemish concoction. Those theories have gone out the window thanks to Brewery Vivant’s offerings. I can’t wait to sample them soon and I’d like to personally thank the brewery for crashing through that aluminum ceiling when it comes to Belgian craft beers.

If you’d like to learn more about the canning revolution in the craft beer industry, check out our friends over at craftcans.com. Their canned craft beer database is the best source of information for discovering which brews you can find in cans on your local package store shelves.

3 thoughts on “BELGIUM IN A CAN”