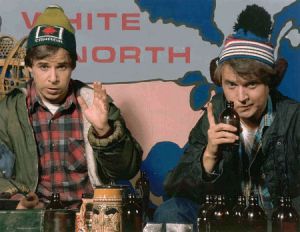 On the first day of Christmas my true love gave to me – Beer.  I’ll admit, I was just going to post my favorite Christmas song of all time, Bob & Doug McKenzie’s 12 Beers of Christmas, but I got all wrapped up in the giving spirit and felt compelled to create my own list of brews.  Some of them make sense, some of them don’t, but who cares?  It’s Christmas!  Get crazy with your bad self.

See what I mean about some of these not making sense?  Bear with me.  I don’t know about you, but the last place I want to see 12 drummers drumming is out in front of a marching band.  Not my idea of fun.  Where would I like to see 12 drummers drumming?  How about at a heavy metal concert!  Ministry had two drummers, what’s wrong with having 12?  Anyway, Death Metal, Drummers – You either get me or you don’t.

Ah, that’s better, isn’t it?  Anytime you can incorporate a line from So I Married an Axe Murderer into your beer name you’re OK in my book.  Plus, San Diego’s Ballast Point Brewing Co. is freakin’ awesome.

On the 10th Day…Lords a Leaping: Three Floyds Dark Lord

Sure, I’ll probably never in my life get to taste the mysterious Dark Lord, but that doesn’t mean I can’t add it to my list.  I suppose 10 Lords a Leaping would probably enjoy an Appletini or an iced down Cosmo more than an Imperial Stout, but I think even the merriest of folk need to branch out every once in a while

Could have gone for a Hefe with a lemon wedge, but why not go all out and bring this beautiful Imperial IPA into the mix.  Plus, the Devil is clearly a woman.

On the 8th Day…Maids a Milking: Left Hand Milk Stout

Love me some Milk Stout.  There’s only so many dairy-related themes in the beer world.

Lost you again, did I?  Well, where do swans go a swimming?  Last time I checked, they do their swimming on or about the nearest pond.  Whatever, if you’re lucky enough to be drinking anything from Deschutes while you’re reading this I’m sure you’ll forgive me.

I’m pretty sure geese go a laying right by that same mirror pond where the swans hang out, but there’s no need to be redundant when you can avoid it.  If you’re gonna be a goose around Christmas, you might as well be an extra naughty goose and do your bidding from a barrel.

Don’t be a big pussy and reach for a Golden Ale.  It’s Christmas – Get bombed!  Nothing better than a 9.5% ABV Triple to chase down the eggnog.

Holy shit!  It’s not “Four Calling Birds”?  God dammit, I’ve been singing the wrong line for years.  Apparently a colly bird is just an ordinary blackbird, so I’ve got nothing on that front.  Although…A black hawk is more or less a black bird, if not an actual blackbird.  We’ll go with Mendocino’s absurdly drinkable stout.  Done and done.

On the 3rd Day…French Hens: The Bruery 3 French Hens

Yeah, yeah.  I could have used The Bruery for half of this list.  As much as I wanted to use their 2 Turtle Doves for the next selection, I had a more difficult time coming up with anything for “French” or “Hen” that I actually wanted to drink.  I won’t defend myself on this one, it’s weak and I know it.

Testudines, Turtle, Terrapin – Not even the smallest resemblance to a bird.  So what?  Not a lick of this list makes much sense anyway so let me go with my turtle thing.  Thanks.

On the 1st Day…Partridge in a Pear Tree: Badger Pickled Partridge Ale

Wow, not a lot of references to partridges or pears in the beer world.  You’ve got your pear cider, which I’m obviously not using, but after that you’re kind of left out in the cold.  I suppose this English Bitter will have to do for the 1st day of Christmas.  At least it’s pickled.  Nothing bad has ever come out of pickling anything.

So, there’s my 12 Beers of Christmas for you and yours to enjoy.  What, you want to know what I’ll be drinking on Christmas Eve?  Thanks for asking.  Me, I’m going with The Lost Abbey Gift of the Magi.  I’m not a religious man by any stretch, but something seems so very right about toasting to the Wise Men of yore.

7 thoughts on “12 BEERS OF CHRISTMAS”