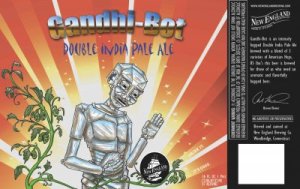 Once upon a time in Connecticut there lived a home brewer named Rob Leonard: a man with a penchant for satyagraha, a love of Robert Orin Charles Kilroy, and a dream of brewing delicious suds canned to look like energy drinks.  Many moons, lessons, and hardships later, Rob, the hero of our story, opened the New England Brewing Co. in Woodbridge, CT, and began to release an impressive plethora of world class suds.  But Rob yearned for more.  Rob longed to somehow tastefully combine the glories of craft ale, the memory of the Mahatma, and Styx’ unforgettable 1983 single.

Amazingly (amazingly, Rob) the dream was born when NEBC cast Gandhi-Bot to the winds of the Brewniverse.

Appearance: Hazy orange.  Like sunset.  In Goa.  After the Swaraj.

Head: One and a half fingers of pure cotton whitewash that yielded to nice lacing as the suds subsided.

Taste: Bitter, hoppy goodness balanced by crisp tangerine and pineapple flavors and just enough malt to diminish the pucker.  A bitter finish gripped the tongue and held on for dear life.  This is a brew that wants to love you back.

Drinkability: High given the ABV.  You will find yourself wanting a second can because it tastes great… and reaching for that can so that you can smell it all over again.

Rating: 3 hops.  A terrific example of the style with a wonderful tropical twist… and a picture of Gandhi… as a robot.

*n.b.  Aleheads does not guarantee the validity of this inspirational story.