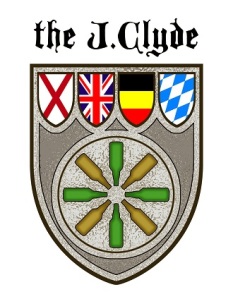 A big thanks to faithful reader Spencer for inviting me out for a brew to celebrate the birthday of his drinking buddy (and occasional Alehead commenter), John E.

John E. celebrated his birthday in style with good friends, high-gravity beers at the J. Clyde, and some delicious-looking cupcakes (props to Spencer’s Mom for the latter). I popped in for a moment, shared a cask-conditioned Boulder Twin Sisters and an Avery DuganA, chatted about beer and ‘Bama brewing laws, and generally enjoyed the company of John E., Spencer and Co.*

*With the notable exception of their female ginger friend who, like all gingers, was extremely off-putting and smelled like brussels sprouts.

John E. is a fine beer blogger in his own right (check out his Tumblr site here). He was kind enough to invite me to a stout tasting in the near future where his crew will be sampling such beer luminaries as the Deschutes The Abyss and Three Floyds Dark Lloyd.

Since it was his 27th b-day, we made the requisite jokes about him having to die this year to live up to the legacy of Hendrix, Morrison, Joplin, and Cobain. We also discussed the most convoluted beer-related posts we’ve every written (it was a tie between my attempt to select a beer to represent every character in The Wire and his post comparing every book in the Harry Potter series to a brew).

Thanks again to Spencer for including me in the festivities. It’s always a treat meeting fellow Aleheads!*

*Also, thanks for not being creepy stalkers and trying to steal my kidneys.