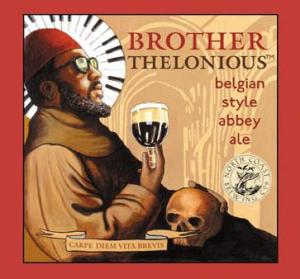 Beer ratings can be problematic. On the one hand, they can be a great way to get a general feel for a beer before you shell out cold, hard cash to purchase it. On the other hand, when it comes to beer, everyone has their own tastes and preferences. The Doc is partial to Double IPAs, Slouch loves his dark lagers…I’m a sucker for Belgian-style ales. That’s not to say Aleheads don’t appreciate good beer in all their forms. It’s just that…well…sometimes our personal preferences outweigh the overall collective wisdom of the masses. There’s nothing wrong with that, of course. If we all agreed about every beer on the market, sites like this wouldn’t have much reason for existing (other than to serve as distractions from our real jobs). We’d all just hop on BeerAdvocate.com, see which beers got an A+, and drink those.

I bring all this up for a reason, of course. That reason is the Brother Thelonius. Alehead readers and Maltercation listeners know that Wifey McHops and I are staunch champions of this fine, Dubbel-style ale from North Coast Brewing Company. But with over 500 reviews on BeerAdvocate, the brew gets a respectable, but hardly noteworthy B+ rating. That doesn’t bother me…in fact, I kind of understand it. It’s not an aggressive beer (and aggressive beers tend to get the highest ratings on BA). It’s not a hard-to-find prestige beer (hell, you can buy it at Whole Foods). And it doesn’t try to do anything crazy within it’s style. So why am I such a fan? Because I love the Dubbel style…and because the Brother Thelonius achieves the style better than almost any other American beer (and just as well as many Belgian brews). It’s like how Roger Ebert writes movie reviews. He doesn’t compare every movie ever made to the one he’s reviewing. Rather, he compares the movie to other flicks in its own genre. You wouldn’t compare Transformers 2 to Schindler’s List or Synecdoche, New York…you’d compare it to other mindless, summer action blockbusters.*

*Although, even compared to other terrible action movies, it’s still an absolute shitfest.

In my very personal opinion, the Brother Thelonius is a masterpiece of Belgian-style brewing from one of my favorite ale factories. It’s subtle, delicious, and endlessly drinkable. I don’t care what the rest of the world thinks…Brother Barley and Brother Thelonius were meant for each other.*

*That didn’t come out the way I wanted it to.

The Brother pours a deep, attractive burgundy with a dense, tan head that dissolves properly for a high-ABV beer (9%). Lacing is present, but not pervasive.

The nose is perfect for a Dubbel. No hops to speak of, but a robust, sweet-caramel malt profile is met in force with aromas of rich, dark fruit (the Wife detected plums, raisins, and ripe cherries). A strong, peppery spice cuts through the sweetness and a mild, biscuity yeast note lingers in the background.

The taste is as well-balanced as the nose. The tartness of the fruit esters hits your tongue first followed by the sweet, robust flavors of caramel malts and Belgian candi sugar.. The aftertaste is a warming, delicate mix of spice and alcohol burn.

As I mentioned earlier, I could drink these every day of the week and twice on Sunday. It’s the most drinkable and smooth Dubbel you’ll ever find. A no question 4 Hops brew for me. I know that flies in the face of conventional wisdom, but hey…to each his own. While you’re sacrificing your tastebuds to the High Priestess of Hops, Brother Thelonius and I will be having an all-night jam session.*

*That didn’t come out the way I wanted it to either.